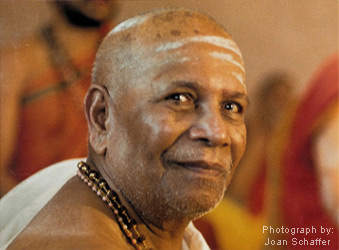 Sri Krishna Pattabhi Jois, lovingly called Guruji by his students, was born in 1915 in the small town of Kowshika, India.

Sri Krishna Pattabhi Jois lived a hard life while attending classes at the university. There, he begged for food and biked long distances.

Later on he was offered a scholarship by the Maharaja of Mysore. His scholarship included food and a salary in exchange for teaching Yoga at the university. He taught there until his retirement 36 years later.

Jois married Savitramma and together they had 3 children, Manju, Ramesh, and Saraswati. Saraswati’s son, Sharath, who born in 1971, carries on the teachings and, with his grandfather, is co-director of their school at Mysore. 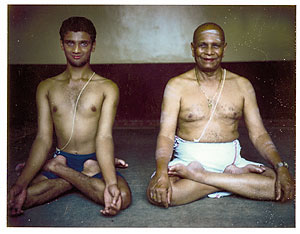 In 1964, they had their first Western student. However, it wasn’t until 1972, after more Westerners met Manju at Swami Gitananda’s ashram in Pondicherri, that the teachings of Ashtanga Yoga really began to spread to the West. After this, Guruji traveled to U.S. which helped spread the teachings and practice of Ashtanga Yoga all around the globe. At this moment, Guruji has been teaching without a break since the day he started back in 1927, around 80 years now. He has kept the practice as pure as it was as taught to him by his teacher Sri T. Krishnamacharya. 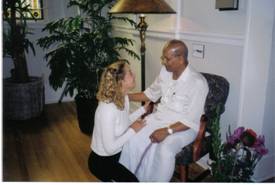 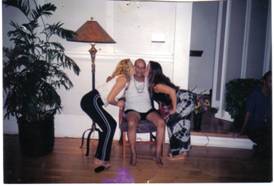