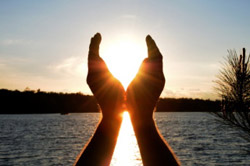 A practitioner of bhakti yoga regards God as being present in every person or sentient being.

Although bhakti yoga was developed within a Hindu culture, it can be practiced by members of other religions as it focuses the believer’s mind and heart on God as a supreme Person rather than an impersonal Absolute.

Bhakti yoga does not place great emphasis on breathing patterns or asanas (physical postures), but rather on acts of worship, devotion, and service.

A practitioner of Bhakti-Yoga is called a bhakta (lit. “Partaker”) or devotee.

Bhakti Yoga is perhaps best known through the presence of the Krishna Consciousness Movement. Better known as the “Hare Krishnas”, this movement practices a form of Bhakti Yoga and is well known for the chanting of the hare krishna mantra.