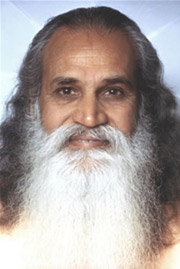 Satchidananda’s name at birth was C. K. Ramaswamy Gounder. He was born in Chettipalayam in the Tamil Nadu region of Southern India in 1914.

He became involved in spiritual matters after his wife’s death, travelling throughout India to meditate at holy shrines and to study with spiritual teachers.

For years, Satchidananda searched out people revered as sages, saints and spiritual masters. Eventually, he discovered his guru, Sri Swami Sivananda, who ordained him into the order of sannyasa. After serving his guru for many years, in 1966 he visited New York City at the request of a U.S. disciple, the artist Peter Max.

Soon after his initial visit, Swamiji, as he was known to his disciples, formally moved to the United States.

Satchidananda first came to public attention as the opening speaker at the Woodstock music and arts festival in 1969.

He also ordained a number of Western disciples into the order of sannyasa. He was the founder of the Integral Yoga Institute and, in 1986, opened the Light of Truth Universal Shrine (LOTUS) at Yogaville in Buckingham, Virginia.

On August 19, 2002, Satchidananda died in his native Tamil Nadu, India. However, Integral Yoga and Yogaville continue his legacy.
Sachidananda wrote numerous books and gave hundreds of lectures, including translations and interpretations of the Bhagavad Gita and Yoga Sutras of Patanjali.