After finishing school, both went on to become renowned performance and fine artists of the legendary New York Lower East Side creative scene where they met and became partners in business and life. They went on to use yoga as another way to frame the questions they had been asking through their art.

These artists and spiritual gurus have spent more than twenty years of their lives in service to yogic principles and have introduced a lot of people around the world to the spiritual benefits of Jivamukti Yoga through their New York City yoga centers and workshop tours through innumerable countries. 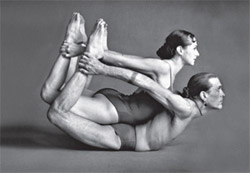 They are often credited with redefining yoga in the West and making the practice of yoga as popular as it is today. Their New York City yoga center, one of the largest in the country, has grown to be the most popular as well.

Gannon is an animal rights activist. Life ran the Life Cafe in Manhattan for many years, a hot spot for music, art, and poetry.

In 1999, along with Janet Rienstra, they founded the Animal Mukti Free Spay & Neuter Clinic at the Humane Society of New York, and every July 4th they hold an annual fundraiser to support it.

Together, they have authored two books, Jivamukti Yoga: Practices for Liberating Body & Soul and The Art of Yoga. They also have several DVDs with the practices and teachings of Jivamukti Yoga.

Their goal is to deliver yoga to as many people as possible through Jivamukti Yoga. They acknowledge the generous gifts they have received from their gurus, Sri Brahmananda Sarasvati, Swami Nirmalanada and Sri K. Pattabhi Jois.