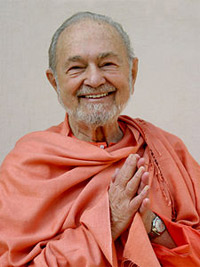 Swami Kriyananda, nee Donald Walters, was born in 1926 in Romania into an American family. He grew up in Europe and then returned to America with his family when he was 13 years old. In 1948, Walters read Paramahansa Yogananda’s “Autobiography of a Yogi”, after which he traveled to California to become one of his disciples.

Paramahansa Yogananda was the first Yoga master of India to take up permanent residence in the West, arriving in America in 1920 and traveling throughout the United States on what he called his “spiritual campaigns”

After Yogananda’s passing in 1955, Walters took the monastic name of Swami Kriyananda and became Vice-President of the Self-Realization Fellowship until his resignation in 1962.

In 1968, Kriyananada established the first Ananda Village as a World Brotherhood Colony in California to fulfill Yogananda’s vision of “World Brotherhood Colonies”, or spiritual cooperative communities. Yogananda envisioned a place where all people, not just monastics, could devote themselves to living a divine life and practicing the teachings of Yoga in every aspect of their daily life. Since then, colonies have been established all over the world.

Kriyananda is also the author of more than 80 books and the composer of 400 songs.
In 2006, because of his service to the spiritual future of humanity, Swami Kriyananda was nominated and accepted as a Creative Member of the Club of Budapest and, in August 2007, he received the Lifetime Achievement Award by the National InterFaith Council in Los Angeles.