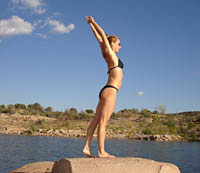 Though somewhat light on meditation, Ashtanga is fast moving and intense, proving to be one of the more physically demanding forms of yoga. The poses are a set sequence of Asanas synchronized with the breath and always performed in the same order. Students move in a quick yet natural flow through a combination of sun salutation poses which include a standing forward bend, upward dog, downward dog, and other poses like standing, seated, backbends, inversions, balancing and twisting poses.The result is continual movement which can improve stamina, strength and flexibility. Ashtanga yoga was the inspiration for Power yoga which, though based on the flowing style of Ashtanga, typically does not strictly adhere to the set series of poses. 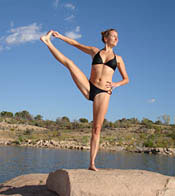 Due to the physically demanding nature of Ashtanga, this form of yoga is not recommended for anyone new to exercise. Nevertheless, it has become increasingly popular in recent years, particularly among athletes, and is a good choice for anyone who is in reasonably good physical condition.

Ashtanga Yoga is a school of yoga which seeks to embody the traditional eight limbs of yoga. The sage Patanjali taught the eight limbs of classical Raja Yoga; outlining them in a treatise he called the Yoga Sutras. To this day, his text remains the single most revered work on yoga and the definitive source on raja yoga. Today, Ashtanga Yoga is also a modern form of Hatha Yoga which was developed by Patthabi Jois, a student of Sri T. Krishnamacharya, who is said to have derived this flowing style of yoga from a lost book of Patanjali.

With Ashtanga Yoga, the path to internal purification is achieved through eight spiritual steps. Each step must first be mastered before attempting the next step. The first four steps of Ashtanga Yoga are considered to be external cleansing practices and include the following: 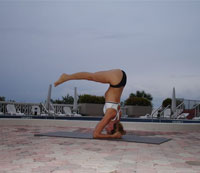 The next three steps are considered internal cleansing practices and include the following:

The final step of Ashtanga Yoga is as follows: