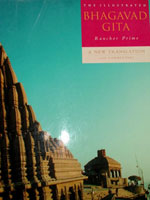 The Bhagavad-Gita is a Sanskrit poem that is basically the essence of Vedic knowledge (the oldest writings that compose the base of Hindu philosophy and spirituality).

The Bhagavad-Gita comes from the epic-religious MahaBharata, and comprises 700 verses divided into 18 chapters of the Bhishma-Pile. The sixth book is where the Vedic, Yogi, Vedanta and Tantric philosophies comes together.

Upon being a practical summary of the 108 Upanishads, it is also called the Gitopanishad (or also Gita-upanishad). It is one of the oldest existing books which speaks on metaphysics and oriental philosophy. This coincides amazingly with the most recent theories of quantum physics and astrophysics. This includes material such as the structure of the universe, natural energy, and the theory of matter.

The principal meaning of the poem is to remove ignorance from humanity, elevating us from the basics of the knowledge toward the top of the Absolute Truth.

This old work deals with the knowledge of the five basics truths: The existence of Krishna, the absolute truth, and also the existence of the “jivas”, or living entities. It also discusses “prakriti” (basic matter) and “karma” (activity).

Originally this poem was transmitted as an oral story. Subsequently its teachings were presented 5000 years ago by the great wise Vyasadeva.

The Bhagavad-Gita describes the teachings of Sri Krishna (who is the principal character) to his friend and student, Rjuna.Thus showing his eternal and divine form to his student. Hence, it is said that the Gita is Krishna himself, since it contains his fundamental principles. In the Bhagavad-Gita, Vishna has 8 incarnations as Krishna, and proclaims himself as Bhagavan “a God that all covers”.

Part of the poem talks about Arjuna the warrior of the clan of the Pandavas. His character deals with a universal concept: human doubt.  He worries about confronting his cousins (the clan of Kaurava) before a certain battle. He also doubts the sayings that are revealed to Sri Krishna and ironically enough responds wisely. His answers are the content of the poem which is both spiritual and ethical.

The first chapter of the Gita speaks solely of the doubts of Arjuna before his future battles, and the following chapters contain the teachings of Sri Krishna through Yoga. Instead of Yoga “asanas” (physical positions), this is a philosophic Yoga doctrine that deals with the union of the soul with God. It also is used to as a tool to lead oneto a road to improving inner development. Knowledge and wisdom are said to be the most important links to reach inner illumination and the harmony of body-mind-spirit.

The chapters are the following:

The first chapter of the Gita can confuse many people who are unfamiliar with Vedic knowledge. This poem deals with a very delicate theme: war and death. This is shown when Krishna encourages Arjuna to “raise and fight”. What we must understand is the symbolism that encompasses the teachings. Basically, the purpose of the story of the battle is the following :

A) Krishna teaches that every person has to assume his Dharma (obligation), however difficult this may be.
B) Every person, even in the worst circumstances, should live without hatred, grudge, and revenge.

We can easily identify ourselves with Arjuna by comparing  our doubts and fears with those that he had. Arjuna’s fight to obtain a city is a metaphor of the fight of any human being. The doubts, fears, anguishes, pride, envy, passion, lies, and human miseries in general can be answered in this text. Krishna gives us clear instructions to all kinds of problems that are presented in our lives. Who am I? Why do we die? Where do we go? What is the evolution of the mankind? Where do we come from? Why do we exist? Which are our obligations in this world? What happens on other planets? What is the meaning of happiness and true knowledge?

The Bhagavad Gita is the highest expression of philosophical Hinduism. It is a sacred book inside another book; so sacred that Hindus consider that after reading it “every sin is destroyed and  virtues are created”. Even though when we open the Mahabharata, there is an affirmation that the fact of reciting a single stanza is “sufficient enough to erase many bad things”.

As a classic of the wisdom and the spirituality of every time, its influence is not limited only to India. The Bhagavad Gita, has affected  the thought of generations of philosophers, theologians, educators, scientists and authors of the Western world. Such people include Platon, Saint Augustine, Pascal, Newton, Leibnitz, Kant, Schopenhauer, Hegel, Goethe, Hesse, C. Jung, Einstein, Prahbupada, Shankaracharya, Ramanuja, and Aurobindo.

Mahatma Gandhi once said: “The Bhagavad Gita has been always a source of comfort for me. At a time when I did not perceived any comforting perspective, I opened the Gita and found that verse that gave me new hopes. The Bhagavad-Gita is not only my Bible or my Koran, is more than that, it is my mother. My earthly mother, the one that gave me being, I lost her a long time ago, but her position has being occupied since by this eternal mother. Each time that difficulties burden me or suffering afflicts me, I seek refuge in its chest.”

Ralph Waldo Emerson said: “I owe a magnificent day to the Bhagavad Gita; it was the first one of the books; was as if an empire spoke us; neither small or undeserving , but on the contrary majestic, serene, consistent, the voice of an old intelligence that in another times and climate examined and resolved the same questions that today move us”.

Wilhelm von Humboldt said: “The deepest and highest the world can show us. I thank God that He permitted me to live as much time as so that I could read the Bhagavad Gita”

Arthur Schopenhauer said: “The most educational and high one of all the readings that is possible to find in this world”

Henry Thoreau said: “Every morning I wash my intellect with the stupendous and cosmogonist philosophy of the Bhagavad-Gita. Compared with their teaching, our civilization and modern literature seem to be stingy and trivial.”

I believe that The Bhagavad Gita is not only a book to study and to understand Hindu philosophy, but also a book of valid teachings for any culture, thanks to its great spiritual and philosophic contributions.

I found this page bhagavadgitaasitis.com very interesting.
It is a translation of the Bhagavad-Gita, including the original sanskrit.

This is different translation by another author

Here you can find several books about Bhagavad Gita, different translations and studies: