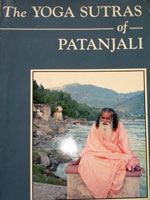 In Hindu Philosophy,Yoga is one of six orthodox philosophical schools. While Yoga has been around for centuries, the Yoga Sutras of Patajali are the oldest Sanskrit texts which are the foundation of Yoga.

These treaties are based on the Vedanta Doctrine and the Hindu sacred writing, the Bhagavad Gita.

This book speaks on aphorisms dealing with philosophical aspects of the conscience mind, while emphasizing how to unite the individual conscience with God. The Yoga Sutras have had an enormous influence in the philosophy and practice of Yoga, and is just as relevant today as when it was first written.

The Sanskrit word Yoga refers to a state of mind in which thoughts and feelings are in suspense (“Nirodha” in Sanskrit).

The word Sutra means thread, or to thread. This refers to the threads of the Japa mala, (Hindu prayer beads), which is an analogy that sutras are strong like beads.

Although the Yoga Sutras date between 600 B.C. and 200 B.C., Yogi’s have not as of yet been able to clearly determine the identity of its author nor the exact date of its composition. The Sutras are texts that do not appear to be unified, but rather as separate texts.

In to the year 300 A.D., Yogi Patajali, a Vedanta Hindu, compiled the Yoga Sutras and grouped them into eight parts which still remain in tact today. Hence, many people often refer to him as the founder of Yoga.

Mythologically, Hindu’s consider Patajali as an incarnation of the divine snake Adi Sesha who is another aspect of the God Sankarshana (the first expansion of the God Vishn). In other words Patajali surrounds and maintains the universe in the shape of a cosmic ocean.

The Yoga-Sutra are 195 aphorisms (sutras), or short phrases formed with technical words and assembled under very strict grammatical rules. Each Sutra is the summary of a dialogue about “Darshana Yoga”, maintained between a teacher and his student. The summaries of this conversation constitutes the text “Yoga Sutra”.

The book is divided into four chapters or books (Sanskrit “Pada”):

Samadhi Pada: With 51 aphorisms, Smadhi Pada is dedicated to the general nature of Yoga and its techniques: “The complete internalization”, its different forms, the obstacles, and the media . This allows it to be at the cessation of all the mental processes, which is the meaning the Yoga. It also refers to a blissful state where the Yogi is absorbed into one being. It is a matter of responding to the question: “What is Yoga?”.

Sadhana Pada: “The practice”. This section deals with conditions of human life and tries to answer the question concerning why we should practice Yoga. All of its impediments are exposed, their causes and their consequences; and finally, this section analyzes the external media, or the five first practices of Classical Yoga. It is comprised of 55 aphorisms.

Vibhuti Pada: (Sanskrit word for “power” or “manifestation”). Dedicated to “the exceptional faculties”, this has 55 other aphorisms (or 56, according to some versions). This chapter exposes the internal media that completes the external part of eight steps Yoga. It also discusses in detail the “Siddhi” or extraordinary powers that challenge the laws of the science. Such powers are achieved involuntarily during the course of practice.

Kaivalya Pada: (Means “isolation”, but as used in the sutras stands for emancipation, liberation).This chapter refers to “the independence or transcendental isolation”; with only 34 aphorisms, they treat philosophical problems implied in the study and practice of the system; specifically two fundamental questions of the metaphysics: the time and the nature of the knowledge. The Kaivalya Pada describes the nature of liberation and the reality of the transcendental self.

Patajali defines Yoga in his text as “the cessation of the fluctuations of the mind”. After developing a meticulous study of the operations of human awareness, he enumerates on the eight steps, or stadiums, called Ashtanga (the Yoga of eight members).  To reach this objective, the Yogi should observe and practice rigorously. They are prescribed in the second Pada of the Yoga Sutras

– Yama: Universal ethical principles: do not lie, do no harm, sexual abstinence and renunciation.

– Niyama: Disciplines of individual conduct: Cleanliness or neatness, satisfaction or acceptance of personal reality, asceticism, study and devotion to one absolute thing.

– Pranayama: Breathing techniques. Beneficial to health, steadies the body and is highly conductive to mind concentration.

– Pratyahara: Orientation of the senses toward the interior. Concentrating the mind in a single point, they acknowledge that the senses be set apart from objects, and that the person be centered.

– Dharana: Concentration. Focusing the mind in a single point to avoid dispersion.

– Samadhi: State of upper awareness: subject and object both disappear in the same meditation.

This link gives us more information about The Yoga Sutras of Patanjali and is also a link to a translation of the Sutras.

Click this link www.theophanyrecords.com to get an audio CD with the Sutras:

With this web page: www.patanjalisutras.com we can hear each Yoga Sutra in audio MP3 format:

We can find many of books about yoga sutras of Patanjali on Amazon.com  with translations, commentaries, reflections, etc:

I found this page very interesting dealing with the translation of the Yoga Sutras of Patanjali, but also included commentaries about the Sutras and Patanjali himself: