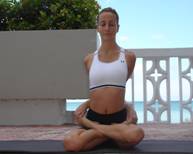 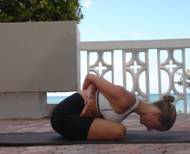 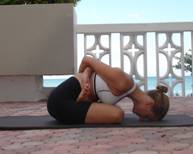 Press the big toe with your fingers because this will stimulate the pituitary gland. Bring your chin in too. This position brings glandular balance, and deep concentration.

For some people it takes a long time, determination, and effort to be comfortable in this position. So, why bother? Well, the healing benefits of this position are unbelievable.

Here is an example:

There is a young woman champion marathon runner who is also very well known because of her talent. Unfortunately, one day she was in a terrible traffic accident, leaving her paralyzed from the waist down. She was only able to move around with the help of her loved ones in a wheel chair.

She went to visit Yogi Bhajan and asked him for a healing way to cure her. Yogi Bhajan didn’t give her anything and told her that at that time there was nothing he could for her. She left and continued for the next few years looking for treatments that would help her recover the use of her legs. Doctor after doctor, and treatment after treatment, the years passed and there were no signs of recovery.

A few years later and out of desperation she went back to Yogi Bhajan. This time Yogi Bhajan gave her as a healing treatment “Bind lotus kriya”, which is the bind lotus sitting position, with the forehead pressed to the floor (or as close as possible). Check the Kriyas section as “Bind Lotus Kriya” (I believe it was 62 min).

She was not able to walk, stand by herself, or sit down on her own, so with the help of another person, a lot of tears, and determination, she got herself into the position. One day she was able to bend one leg and after time the other. With the years passing and the help of her friends and family, the use of props, and a lot of determination, the day came were she was able to walk again.

After she was healed she went back to Yogi Bhajan, and asked him why he didn’t give her this Kriya when she came the first time. She would have saved a lot of money spent in useless treatments and also emotional angst. He told her that it was because she was not desperate enough to try this kriya.

“Big difference in doing the best you can, instead of doing whatever it takes” Indra K

On one occasion, I personally attended a three hour class to get into this pose, with each pose as preparation to open up the hips and the knees. The most beautiful part was to learn the mantra that goes with it. The one that Yogi Bhajan taught, called Re Man Eh Bidh Jog Kamao  (found in the mantra section). There are different versions of it too. A good one, in my opinion, is the one by Snatam kaur Khalsa.