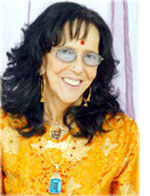 Ma Jaya Sati Bhagavati is an American-born spiritual teacher who is widely known for her work serving the homeless, the poor, and people living with AIDS. She is also a gay activist and a forerunner in the struggle for human rights and religious freedom, participating in interfaith and inter-religious dialog and dedicating her life to peace.

Ma Jaya grew up in poverty and was homeless for years, an experience which she credits with teaching her to respect the dignity of every human being. In 1972, she underwent a powerful spiritual awakening in which she encountered the presence of Christ. Later, she met her teacher, the great Indian saint Swami Nityananda, whose influence formed the basis of her teaching.

In 1976, Ma Jaya established, in Florida, the Kashi Foundation and Ashram, an interfaith residential community and teaching center also known as Neem Karoli Baba Kashi Ashram. She has since established centers in New York, Los Angeles, Washington, D.C., Santa Fe, Chicago, Atlanta and London. She also serves as a trustee on the Governing Council of the Parliament of the World’s Religions.

In 1990, Ma Jaya founded the River Fund as a service arm of the Kashi Foundation. The River Fund also helps fund impoverished townships in Cape Town, South Africa, and supports Ma’s Providence Orphanage in Uganda and orphanages in Mexico, while also supporting the Aids Treatment Access Programs in Cuba and South Africa. In 1997, supported by the Dalai Lama, she founded World Tibet Day.

Ma’s teachings are founded in Hindu philosophy and integrate many faith traditions. As a Master of Kundalini Yoga, Ma created the path of Kali Yoga, the yoga of the Mother, which accesses the energy of the Divine Mother. Her teachings focus on attaining spiritual fulfillment through selfless service to humanity.