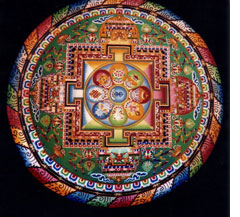 Mandala is a concentric diagram with spiritual and ritual significance. The word is of Hindu Sanskrit origin and means “essence”, “having” or “containing”. It can also be translated as “circle-circumference” or “completion”. It appears in the Rig Veda but is also used in other Hindu Religions, particularly Buddhism.

In various spiritual traditions, Mandalas are employed as a spiritual teaching tool for focusing attention and establishing a sacred space, and as an aid to meditation and trance induction. Mandalas are primarily recognizable by their concentric circles and other geometric figures, but they are far more than geometric figures. For Tantric Buddhists, they are rich with symbolism and sacred meaning.

Simply stated, a Mandala is a sacred geometric figure that represents the universe. When completed, a Mandala becomes a sacred area that serves as a receptacle for deities. By mentally entering a Mandala and proceeding to its center, a person is symbolically guided through the cosmos to the essence of reality. By constructing a Mandala, a monk ritually participates in the Buddha’s teachings.

In Tibetan Buddhism, the contemplation of sacred images is central to religious ritual, and a Mandala is one of the most important of these sacred images. A Tibetan Mandala is usually made with colored sand. In China, Japan and also in Tibet, Mandalas can also be made in bronze or stone three-dimensional figures. The process of constructing a Mandala is a sacred ritual. It is meditative and can take days or even weeks to complete. Before a monk may participate in the construction of a Mandala, he must follow a period of artistic and philosophical study.

Mandalas are constructed from the center outward, beginning with a dot in the center. With the placement of the center dot, the Mandala is consecrated to a particular deity. This center is a symbol. It means a ‘seed’, ‘sperm’, ‘drop’, the salient starting point. It is the gathering center in which the outside energies are drawn and, in the act of drawing the forces, the devotee’s own energies unfold and are also drawn. Thus it represents the outer and inner spaces. Its purpose is to remove the object-subject dichotomy.
In its creation, a line materializes out of a dot. Other lines are drawn until they intersect, creating triangular geometrical patterns. The outlying square symbolizes the physical world moving in four directions, represented by the four gates.

Mandalas are seen as sacred places that reminds us of the presence of sanctity in the universe and their own potential. In the context of Buddhism, the purpose of a Mandala is to put an end to human suffering, to attain enlightenment and to attain a correct view of Reality. It is a means to discover divinity by the realization that it resides within one’s own self.