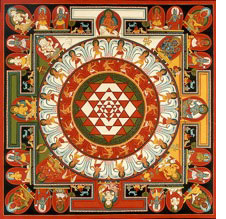 Yantra are sacred symbols traditionally used in Eastern mysticism as instruments for focusing and balancing the mind on a spiritual concept.

Yantra is a Sanskrit word that literally means “Instrument” or “Machine”. It is derived from the root ‘yam’, meaning to sustain or hold, hence it is visualized as a receptacle of the highest spiritual essence.

This powerful device allows a person to focus cosmic energy and achieve their desired results through worship. There are many different types of Yantra based on the kind of results one needs to achieve, as it is itself a diagrammatical representation of various mantras.
Visually, it is a geometric pattern made of several concentric figures as follows:

All primal shapes of a Yantra are psychological symbols corresponding to inner states of human consciousness. This innate simplicity of composition is identified with spiritual presence.

They also include more complex and detailed symbols as follows:

Yantra also may be used to represent the astronomical position of the planets over a given date and time. It is considered auspicious in Hindu mythology. These Yantra are made up of various objects like paper, precious stones, metal, and other things.

It is believed that constantly concentrating on the representation helps to build fortunes, as planets have their peculiar gravity which governs basic emotions and karma. These Yantra are often made on a particular date and time according to procedures defined in the Vedas.

The act of wearing, drawing or concentrating on a Yantra is said to have spiritual or astrological or magical benefits.