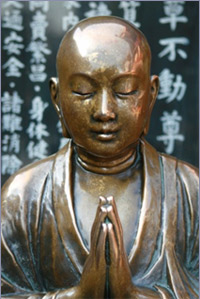 Patanjali, author of the Yoga Sutra, presented in the second chapter of his book five ethical precepts called yamas. The yamas were designed as a basic guideline for living a life of personal fulfillment that also benefits society. The consequence of not following these teachings, according to Patanjali, is our continued suffering.

The first yama is known as ahimsa, which is typically translated as “nonviolence” or the avoidance of violence. Ahimsa refers to physical violence as well as the violence of thoughts and words. In this way, it is believed that our negative thoughts about ourselves and others can be as powerful and damaging as physical attempts to harm. Ahimsa, in its entirety, refers to the total rejection of inflicting pain or harm – whether it be by thought, word or deed – to any and all living creatures.

The practice of ahimsa includes constant vigilance and observation of ourselves when interacting with others, taking note of our thoughts and our intentions. Ahimsa prohibits the killing or injuring of living beings as it is believed that violence brings about negative karma. To practice non-injury, one must be harmless in mind, mouth and hand; one must replace hatred with love and cultivate forgiveness. Ahimsa is sacrifice but it is also power and strength.

Himsa is translated as violence or injury. There are many forms of himsa including contempt toward others, prejudice, unreasonable dislike, hatred, abuse, harsh or rude speech, discourtesy, and lies. These must all be discarded in order to practice ahimsa. One must not wound others or their feelings, whether it be by action, words or even the tone of voice. All forms of harshness should be avoided. In fact, even the approval of another’s harsh actions and the failure to relieve another’s pain or to help another in distress is seen as himsa. To practice ahimsa, you must accept the insults and criticisms, rebukes and assaults of others without acting in retaliation or causing offense. Even under the greatest of provocation, you still must refrain from thinking evil thoughts, harboring anger and even cursing. Practicing ahimsa requires bravery and fearlessness. It is not for the weak. Ahimsa is the perfection of forgiveness.

Understandably, beginning in the practice of ahimsa is not easy. Start by controlling the physical body first. When faced with your own thoughts of hatred or revenge, do not act on them. When faced with the harmful actions of others, do not cause injury in return. Practice forgiveness. When you feel that you can control you body, next control your speech. Do not speak evil or harsh words to anyone, do not harm others with your tongue. Constantly check the impulse of your speech. Again, practice forgiveness. If you fail, and you may, simply remind yourself and start again. Once you have good control over your body and your speech, next work on controlling your thoughts. Do not think of injuring anyone, keep these thoughts in check. Instead, reflect and meditate. Allow the mind to become calm. Practice this for several months and your negative thoughts will fade. Always remember that, by injuring another, you injure your own Self. Ahimsa and Divinity are one. By practicing ahimsa in its purest form you may become divine.