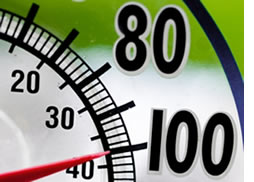 Bikram Yoga is an increasingly popular, intense form of yoga which is particularly well-known for the high temperatures in which it is practiced. Also known as Hot Yoga, practitioners perform a series of 26 positions, or asanas, twice during a 90-minute session in rooms that are heated to between 95 and 105 degrees Fahrenheit.

The ideal temperature prescribed by the founder, Bikram Choudhury, is a minimum of 105 degrees Fahrenheit, with approximately 40% humidity. According to the Bikram’s Yoga College of India website, this is the optimal environment for increasing heart rate, improving muscle strength, detoxifying the body, warming up and stretching the muscles, improving circulation, clearing the circulatory system and preventing overheating.

Bikram Choudhury was born in Calcutta, India in 1946 and has been practicing yoga since the age of four. After earning multiple national yoga championships in India, at age 17, Choudhury injured his knee in a weight lifting mishap. Told that he would never walk again, Choudhury turned to his yoga teacher for assistance and was walking again in six months.

With a deeply held belief that yoga could cure physical injuries and chronic conditions, he first began to open yoga schools through his yoga master, then went on to establish Bikram’s Yoga College of India in Beverly Hills in 1974.

Bikram Yoga is a powerful workout that offers the general benefits of yoga, such as improved flexibility, deep stretching, detoxification, increased oxygenation and improved circulation. With the combination of traditional yoga asanas and the sauna effect of the heated rooms, Hot Yoga practitioners experience profuse sweating, deeper stretching through muscles warming up quickly and enhanced detoxification. The series of poses were designed to stretch muscles and connective tissues in a particular order and to use the tourniquet effect to create pressure in the arteries and veins by cutting off the blood supply, followed by releasing the pressure quickly causing the blood to rush through the arteries and veins, flushing them of toxins.

In a departure from the majority of yoga traditions, there is a growing movement in the Bikram Yoga community that involves competitive yoga contests with titles and trophies. The organizers of this movement are actively campaigning to have yoga included in the 2020 Summer Olympic Games.

While this may be frowned upon by some yogis, Hot Yoga is growing in popularity and appeals to a wide variety of yoga practitioners. While some surely enjoy the aggressive, competitive nature of Bikram Yoga, others simply enjoy the vigorous workout and health benefits it offers.

From the series of poses to the special breathing techniques, called Kapalabhati Breath, Hot Yoga is a unique, intense from of stretching, toning and muscle strengthening that offers a number of physical and emotional benefits to its practitioners.

If Bikram Yoga sounds like it might be for you, be sure to bring water to drink during and after the class, a change of clothes, and your own mat and towel. You might also want to bring a bag for your wet clothes and avoid eating within a couple of hours of your session.