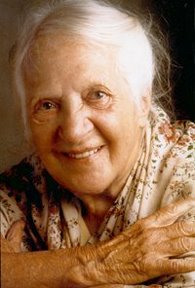 Indra Devi was born on May 12, 1899 in Riga, Livonia. She is best known as an early disciple of Sri Tirumalai Krishnamacharya and as a renowned yoga teacher. She was, in fact, Krishnamacharya’s first female pupil which earned her the nickname of “First Lady of Yoga”. She was also the first Western woman at an Indian ashram. During the twelve years that she lived in India, she also starred in several Indian films.

Krishnamacharya undertook Indra Devi as a pupil in 1937, supervising her asana and pranayama training at his school. After her first year, he urged her to teach yoga. Through her teaching, Devi was instrumental in spreading yoga worldwide. She taught in China, where she opened her first yoga studio, as well as in India, Mexico, Russia, the U.S. and in Argentina. In the U.S., Devi founded a yoga studio in Hollywood where she taught yoga to many celebrities including Gloria Swanson, Jennifer Jones, Ramon Novarro and Olivia de Haviland. Devi moved to Argentina in 1982 where she later became president of honor of the International Yoga Federation and Latin American Union of Yoga. She taught in Argentina for fifteen years. With six studios throughout Buenos Aires, the Fundacion Indra Devi has taught some 25,000 students. Devi was known by her followers as Mataji and authored several books including Forever Young; Forever Healthy; Yoga for Americans; Yoga, the Technique of Health and Happiness,and Yoga for You.  Indra Devi passed away on April 25, 2002 in Buenos Aires at the age of 102.