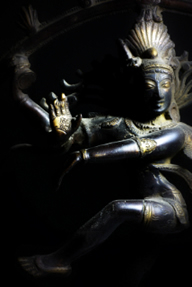 In the series of published documents titled “Tantra”, there are many underlying meanings attributed to the images found within its pages. The outward appearance does not represent a look, but rather a meaning from within that can be seen by the physical world. Each image carries its own representation.

During the discovery process, sadhakas – students of the Tantra teachings – and other employers’ of the mind had come across multiple versions of the ultimate energy force Shakti. Tantra discloses ten primary exhibits of Shakti, called the ten maha vidyas. Maha translates into English as the word “great”, while vidya means “knowledge”.The first maha vidya is seen as the physical manifestation, Kali which represents Kaala – Lord of Death, Time, and Manifest Dimension. Shakti is the source of all energy, and Kali is the energy source found in Kaala.

Kaala also denotes a state of being, confined by time, but not submitted to an object or area. Although by very definition Kaala seems to be a powerful source, it is indeed secondary to Kali, the primary force. Kaala is one facet of Shiva, the male counterpart to Shakti. Kali is a feature of Shakti. As the main goddess of the tantrics, Shakti’s happiness must be met in order for one to further their journey. Only following the passage beyond the Kali maha vidya is one authorized to receive the great intellect of the remaining maha vidyas.
In the ancient writings compiled in the Devi Bhagavate, a war between evil forces and the shaktis is described. Kali, a Shakti, fought this battle. The text may be subject to spiritual and mythological interpretations, however the most viable explanation stems from her consumption of all that is of the conscious world. During the battle, the active force Kali engulfed all life energies that were present.
The story explains that following the feast on the planet’s evil life forces, Kali became deranged and did not want to end the path of destruction. Shiva, the ruler of Kali began to practice yoga nidra, or the yogic sleep in the destructive path of her follower. Kali stepped on the body of her master which brought sense back to her existence. She realized that she should not try to overpower all creation; the extent of her power was with dealings of time. The role of Kali was important, and it was understood from then on that Shiva ruled over creation.

The moment of realization is depicted as Shiva in a deep sleep, lying underneath Kali. The image represents the pause in life that can occur when a force attempts to overpower consciousness. When studied from a yogic perspective, one may better understand this concept. That Shakti fundamental teaching, presented to yogi as Kundalini. Kundalini is a guiding rule on its own, existing alone, far from Shiva. Kundalini dwells above the head, in the seventh primary chakra called the sahasrara. Shakti exits alone in mooladhara, or sex of a human being.