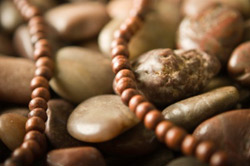 Most yoga practiced in the U.S. is comprised of some form of Hatha yoga. Hatha yoga generally relies on the body to create a wholeness of the self and, perhaps for this reason, most Americans mainly associate yoga with the postures and movements of the body, or asanas. This idea is further reinforced by the fact that the majority of classes, workshops, books and DVDs tend to focus on the shapes of the body and achieving the correct postures.

Asanas are indeed an important aspect of yoga and some consider them the primary building blocks of yoga, but they are only one aspect. In fact, the asanas and postures make up just about one-fifth of yoga, and that includes Hatha yoga. As a result, most of us are practicing about 20% of yoga.

So just what is the remaining 80% of yoga? The rest of yoga is divided fairly equally into pranayama, mudras, mantra and meditation. Pranayama is the breath. Through pranayama, you learn to breath properly while performing asanas, but you also learn far more. By practicing pranayama, you begin to see the powerful effects of yoga including good health, emotional balance, conscious awakening, enhanced glandular function, and the eventual control of the energetic being of the self. Pranayama is not practiced as often as asanas, perhaps because it is a more difficult practice. Furthermore, many novices are simply not prepared mentally or physically to fully appreciate or even practice pranayama. That does not mean, however, that it should not be practiced, and a good yoga instructor can help you.

Mudras may be described as energetic hand and finger positions and they also include bandhas (muscular body locks) and focused gazes of the eyes. Mudras and bandhas help to transform the consciousness, and they direct healing energy throughout the body. While they are simple in many ways, mudras are nonetheless a very powerful aspect of yoga and are very prevalent in authentic yoga practice. Despite the fact that the majority of us practice some form of Hatha yoga devoid of mudras, they are in fact thought to be the most powerful practice of Hatha.

Mantra refers to sound. A mantra is a word, phrase or syllable which is chanted thoughtfully and with increasing attention, either aloud or silently. The best known example of a mantra is probably “Om”, which is considered to be the supreme and most sacred syllable believed to be the spoken essence of the universe. Yogis have long believed mantra to be the most powerful tool of all of yoga practice and, traditionally, performing asanas or pranayama without mantra would have been unthinkable. Today, however, it is less common in yoga practice and many beginners find themselves confused or intimidated by the very thought of mantra. Again, a good yoga instructor can help to introduce you to and guide you through the practice of mantra.

Meditation is the last part of yoga but it is, in many ways, the true embodiment of what yoga is about. All other practices, from asana to mantra, are directed toward the final meditative experience. Meditation may be described as contemplation or reflection, typically involving concentration on an aspect such as breathing or the repetition of a mantra, with the purpose of reaching a heightened state of spiritual awareness. Meditation relaxes the body, calms the mind and increases awareness of the present moment. With regular practice, meditation has untold physical and mental benefits. It can reduce anxiety, chronic pain, high blood pressure, serum cholesterol levels, blood cortisol levels, substance abuse, and symptoms of post-traumatic stress disorder. Regular meditation can increase intelligence, improve overall health and quality of life, and increase longevity.