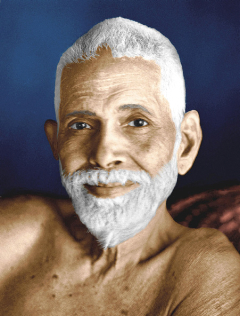 “Of all the thoughts that rise in the mind, the thought ‘I’ is the first thought.”

Sri Ramana Maharshi was an Indian sage born on December 30, 1879 in the southernmost region of India. He is said to have had a life-changing experience at the age of sixteen or seventeen which led him on a great path of self-enquiry in which he questioned “Is this body ‘I’?” His enlightenment came with the realization that it was not.

Soon after his enlightenment, Maharshi moved to Arunnachala, the sacred hill in Tiruvannamalai, where he lived in a blissful state of oneness for the next fifty-four years until his death. His devotees built an ashram there, Sri Ramanasramam. Thousands came here to visit Mahashi including Swamis Sivananda and Chinmayananda, Harilal Poonja (“Poonjaji”), and monks of the Ramakrishna Order. Mahashi, known for his often silent presence, encouraged the practice of self-inquiry, known as atma vichara. His teachings have been classified as the Path of Knowledge, or Jnana marga, and are documented in the book Nan Yar? (Who am I?). Maharshi passed away on April 14, 1950 at the age of seventy. More information about Ramana Maharshi can be found at www.arunachala.org and www.ramana-maharshi.org.