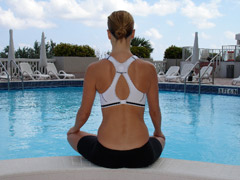 Kundalini is a word with many meanings and interpretations. In ancient traditions, it was a type of yoga that was verbally passed down to the student by a Master, Teacher, or Guru. Kundalini Energy is often described as a coiled up serpent resting in the muladhara (root) chakra, lying dormant until its energy is awakened. Once awakened, this force is said to travel up the spine, or sushumna, through the chakras, bringing about an energetic shift in the student.

Kundalini has many root words. The word “Kunda” in Sanskrit literally means a pit in which to burn trash. This could be interpreted symbolically as a fire used to burn up one’s attachments, helping the mind to become more pure. “Kundala” means unending ring, spiral, or coil. “Kundalin” means serpent, which has many symbolic translations. A serpent can be considered poisonous, can resemble unhappiness, change, or death. Snakes can also be seen as fortuitous or lucky, as they accompany many Hindu deities, including Shiva, Vishnu, and Ganesh. Sometimes this serpent is identified as a goddess named Kundalini Shakti. The Sanskrit word “Shakti” means divine energy, or the feminine aspect of the divine. Kundalini Shakti is said to uncoil herself to move upward through the chakras and stir up dormant energy within a student. This experience assists the student in attaining a deeper level of awareness.

Hindu Tradition requires the blessing of a teacher to initiate the movement of this energy, and only once the teacher deems the student prepared. Once the serpent wakes up, so to speak, the student becomes more energetically attuned to his or her place in the universe and can approach the world and this life from a higher level of consciousness. Some say that years of meditation under the guidance of a teacher can awaken this energy. Others believe that near death experiences, trauma, or recovering from addictive substances can trigger such an awakening.

The tradition of Kundalini yoga was considered sacred and kept secret for many years. Kundalini Master Yogi Bhajan brought these teachings to the masses in the late sixties. Though considered a philosophical path to enlightenment, the physical element also offers the student ways to experience Kundalini. Western Sihks have incorporated a vigorous hatha yoga style practice that is said to stir up this energy. A specific sequence of kriyas (energetic actions) that incorporate asana (postures) and pranayama (breath control) are followed to help purify the nervous and gland systems of the body. Many of these kriyas are held for long periods and sometimes push the student to a place of physical euphoria and intense mental focus. After time, it is believed, the student will begin to absorb the more spiritual aspects of the practice, experiencing their own true inner nature.

A theme that is consistent among all perceptions of Kundalini is that of upward motion. A ripple of energy is initiated at the base of the spine, travels through each chakra, and finally up to the crown of the head. Every chakra has within it a unique, concentrated prana (life force), which can also become roused by this energetic shift. Triggering this ascending energy is a special, individual experience, and is a goal for many spiritual seekers.