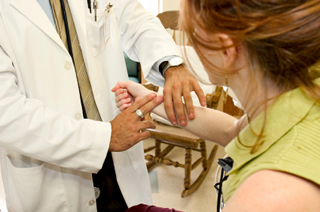 While the chances of having cardiovascular disease in women is much lower than in men, this type of condition rises in women after the age of 60. In fact, after 65 years of age, women tend to have more heart attacks than men, and with increased complications. In general, women are more concerned about breast cancer than heart disease, but research shows that 1 in 2.5 women die of heart disease, compared with one in 30 who they will die from breast cancer. There are five important points that should be considered for the care of women”s heart health and these are as follows:

Heart disease is the most important issue in women´s health.

Many women do not realize they have a heart condition simply because they do not show the classic symptoms. Men tend to have clearer symptoms like severe chest pain. A study found that women”s most reported symptom was fatigue (70%), followed by difficulty sleeping (50%), decreases in breathing or indigestion (40%), and anxiety (35%). Other symptoms that were discovered were back or shoulder pain, palpitations and flu-like symptoms. Doctors may take a longer time to recognize if a woman is having a heart attack because the symptoms listed can be attributed to other conditions which in turn delays appropriate treatment.

In some women, heart disease tends to affect small blood vessels instead of arteries.

Recent studies have shown that women are more likely to have plaque in smaller branches in the arteries. When this occurs, the plaque cannot be detected with an angiogram. This model of “hidden” cardiovascular disease is called coronary microvascular disease. This is when the plaque is distributed parallel to the walls of the arteries. Clusters or groups are not formed in this type of heart disease, creating the illusion that it appears normal and showing no visible blockage. Women who have recurring chest pain and have had poor outcomes in a stress test, but have a normal appearance in an angiogram, can be at risk for heart disease without knowing it.

Tests results can be less accurate in women.

Angiograms are not the only tests that can fail in detecting heart disease in women. The walking test and the ones that monitor the electrical activity of the heart are noticeably less accurate in detecting heart disease in women. It is advised that women insist on tests that include pictures of the heart utilizing ultrasound or radioactive dye. Women should pay special attention to other things like their cholesterol. The perfect cholesterol level for women is 50mg, 40 mg for men, and when these levels begin to fall the risks are higher for women than in men.

After being diagnosed, women do not always receive the proper care.

Women are less likely than men to begin treatment, take medications, perform cardiac rehabilitation, or engage in any type of surgery, making them less likely to survive a heart attack. Women should be aware of their heart health and know all the factors that can lead to a heart disorder. Women should not neglect the basic tests when there is a history of heart conditions in the family. Regularly monitoring of hemoglobin in women with diabetes and controlling blood pressure and cholesterol can lead to a healthier heart when combined with a healthy diet. Women who are older than 60 years of age are more vulnerable to a type of heart disease known as “broken heart”, a syndrome that is caused by extreme emotional stress.

1 – Fatigue or unusual fatigue.
2 – Having reduced breathing or unusual and sudden breathing during daily activities or rest.
3 – Bothersome feeling between the shoulder blades.
4 – Chest pain or discomfort in the upper chest.
5 – Indigestion or heartburn.
6 – Anxiety.
7 – Palpitations.
8 – Flu symptoms or fever.