The most exclusive way of healing in Kundalini yoga is the sound healing technique using a ‘Gong.’
Sound healing is by itself a unique healer, where the Gong is used appropriately during the deep relaxation session.
The Gong is said to be a real engine of power, more powerful than any other musical instrument. The energy that is revealed from a Gong is not just a mere fundamental tone, but it is supposed to be a great wave.
When played properly, the Gong produces a whole spectrum of harmonics that are based on pressure waves of sound, which vibrate the energy meridians in the body and bring them into balance.
The sound of the Gong recalibrate the physical, emotional, and spiritual bodies and raises the frequency of your electromagnetic field (aura).
It is excellent therapy for all stress-related issues, depression, fatigue, feelings of separation, loneliness, anger, fear and hostility, and many other conditions caused by a lack of balance and harmony in the body and mind, as It has a revitalizing effect over the immune and nervous system.
Gongs belong to the oldest and most important musical instruments of South East Asia. Their origins may be traced back to the second millennium B.C., but it is assumed that the Gong is much older.
In Chinese history, Gongs are mentioned around 500 A.D. 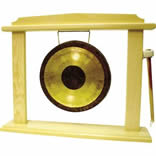 Only few families knew the tradition of Gong making as it was passed from generation to generation. The art of making Gongs was veiled in a sense of magic. Gong makers believed that a gong could only succeed with the help of higher powers, and that they were exposed to forces more so than ordinary humans.
The Gong was an important element in the lives of of Far East people and is still in some countries today.
In Asian families, the Gong was an attribute of wealth and served as a status symbol. In rites, this instrument was used in the evocation of ghosts and in the banning of demons. Touching a Gong brought you fortune and strength.
In rituals of the Far East, the Gong has retained its special significance to this day.

“The Gong is the sound of Creativity itself. One who plays the gong plays the Universe. The Gong is a beautiful reinforced vibration. …it is the only tool with which you can produce this combination of space vibrations.” Yogi Bhajan

“Gong therapy also relieves stress and has a profound, revitalizing effect on the immune and nervous systems. When you bathe in the healing sound of the sacred gong no mind chatter can stand in the way. The wave of total sound is both heard with the ears and felt as a powerful vibration sweeping over and penetrating deeply into the body – cleansing, releasing, healing and harmonizing on all levels.” Guru Ram Kaur
Kundalini Yoga Table of Contents