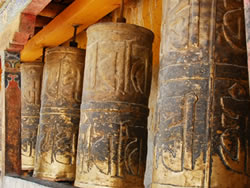 It is said that Kundalini Yoga was originally used in India by the warrior class in the Sikh religion.
However, an examination of mystical literature and traditions showed that Kundalini, called by various names, seems to have been a universal phenomenon in esoteric teachings for perhaps three thousand years.
Kundalini-type descriptions or experiences are found in esoteric teachings of the Egyptians, Tibetans, Chinese, some Native Americans, and Africa.
Kundalini has been interpreted from the Bible as “the solar principle in man”, and is referenced in the Koran, the works of Plato and other Greek philosophers, alchemical tracts, and in Hermetic, Kabbalistic, Rosicrucian, and Masonic writings.
Also the Upanishads, the sacred scriptures of Hinduism that date back to the fifth century B.C., provided a written description of Kundalini, although the oral tradition dates back even further.
For thousands of years, this sacred science and technology was veiled in secrecy, passed along in the oral tradition from master to chosen disciple.
Indian yoga, with its emphasis on the transmutation of energy to higher consciousness, contributed the cultivation of Kundalini and the preservation of its knowledge.
Kundalini was a rarity in the West before the 1970s until more attention became centered upon the consciousness. In 1932, for example, psychiatrist Carl G. Jung and others observed that the Kundalini experience was rarely seen in the West.
Kundalini Yoga was never taught publicly until Yogi Bhajan, challenging the age-old tradition of secrecy, brought Kundalini Yoga to United States in 1969. Since then, it has spread all over the world.

He wrote, “I am sharing these teachings to create a science of the Total Self… It is the birthright of every human being to be healthy, happy and holy”.