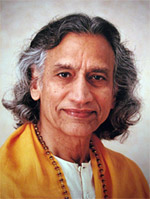 Yogi Amrit Desai, who was born in the small village of Halol in India, developed Kripalu Yoga. Desai, who is commonly referred to as Gururdev, was inspired by the life and teachings of his guru, Swami Kripalvananda.

Kripalvananda was a highly renowned master of kundalini yoga as well as a moving speaker, prolific writer, and talented musician. His name means “the compassionate one” in Sanskrit. He was born in Dabhoi, Gujarat in 1913 and his guru was Dadaji. After becoming a swami, Kripalvananda renounced all worldly attachments and traveled throughout Western India lecturing, writing, and teaching. Desai persuaded Sri Kripalvananda to come to the U.S., where he spent 4 years performing intense sadhana (10 hours a day) at the Kripalu Center. Sri Kripalvananda returned to India where he passed away in 1981.

The Kripalu Center is named after him. His teachings still serve as the foundation of Kripalu’s approach to yoga and spiritual life. Now Amrit desai,or GururDev ows his own center in Florida.