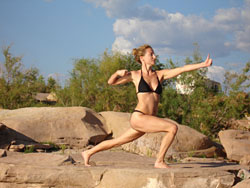 Kundalini Yoga, which is often said to be the most powerful form of Yoga known today, is a style of yoga with roots in Hatha Yoga. Kundalini Yoga focuses on the awakening and controlled release of the Kundalini energy located at the base of the spine. Kundalini means ‘coiled up’ in Sanskrit. It is said that the energy at the back of the spine takes the form of
a coiled snake and, by awakening the snake and sending it moving up the spine to the brain, a sublime state of ecstasy and awareness can be achieved. 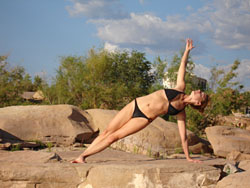 Kundalini Yoga places greater emphasis on chanting and breathing but also includes classic poses, coordination of breath and movement, and meditation. The Kundalini in the body can be awakened by practicing Asanas, Pranayama and Mantras; concentrating and training the mind; practicing Hatha Yoga, Bhakti Yoga and Jnana Yoga; and practicing selflessness and intellectual inquiry. Once the Kundalini has been awakened,
individuals may feel a variety of experiences including sensations along the spinal cord, trembling, tingling sensations, waves of heat, bursts of joy and even transcendental visions. Some believe that activating the Kundalini energy begins the path toward Enlightenment.

Kundalini is a popular style of yoga today and can be particularly beneficial for those dealing with addictions.